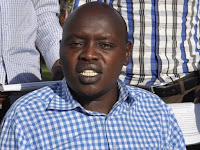 Speaking at his county on Saturday, Cherargei, who is a close confidante of Deputy President William Ruto, revealed that Kinoti and Haji are targeting members of the Kalenjin community in the ongoing war against graft.

He claimed that the behaviour of the investigating officers was fishy as they appear to target individuals from certain communities.


The senator also revealed that he has in the past chaired a multi-agency meeting where they deliberated on how to effectively fight graft in the country.

“In the meeting, I was very clear to DPP Noordin Haji and DCI George Kinoti not to use the fight against graft to target individuals or communities,” Cherargei said


He, however, assured residents that leaders from the Rift Valley region would ensure that the community doesn’t suffer any form of victimisation.
“We are not going to sit back and watch the careers of our sons and daughters being ended unfairly. Do not use the fight against graft to target 2022 politics,” he warned.

The post We will not sit and watch KALENJINS leaders being humiliated by DPP and DCI – we will fight back and there will be casualties – RUTO’s man diarrhoeas appeared first on Kenya News Alerts.