This is why you should avoid consuming instant noodles (Indomie) at all costs if you love your life.

Tuesday, March 5, 2019- Instant noodles have fast become a favorite for most people since they are inexpensive and very easy to prepare.

The convenience it brings to a busy home or when there is nothing to eat is second to none.
However, as with anything instant or processed, and mostly targeted at kids, eyebrows have been raised in concern over hoe beneficial they are to the body.
To put this into perspective, this guy has taken to twitter to warn about the harmful effects of consuming these instant food and we thought you should know about it.

He wrote: “This thing (Indomie) is killing you people. 1300mg of Sodium in a small pack!!! Sodium is a silent killer responsible for high BP, excess fluid retention, stroke & kidney failure. For context: A can of coke is 45mg sodium. One pack of indomie = 29 cans of coke re: sodium content.
Moreover, Noodles have been found to inhibit the absorption of nutrients for the children under 5.
They are also enriched with carbohydrates, but no vitamins, fiber and minerals. This makes the instant noodles junk food.
Regular consumption of instant noodles also affect the body’s metabolism, because of the chemical substances like additives, coloring and
preservatives inside therein. 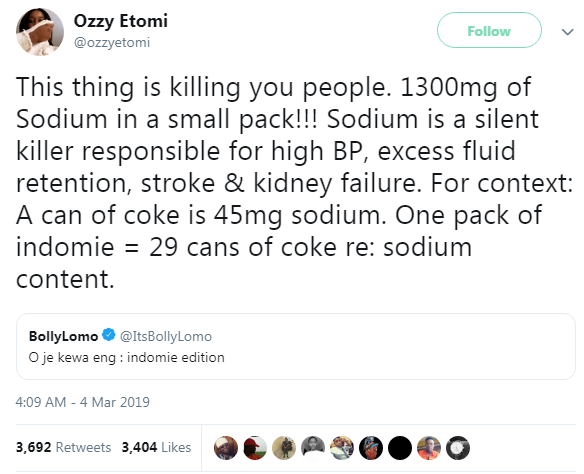 The post This is why you should avoid consuming instant noodles (Indomie) at all costs if you love your life. appeared first on Kenya News Alerts.