Sunday, April 21, 2019-There was somber mood at  little known Kabimoi village in Eldama Ravine on Saturday after it was announced that former President Moi’s son, Jonathan, was dead.

JT as he was commonly known,  was a prominent businessman and farmer  in the area and everybody knew him because of his generosity.
But despite his generosity and entrepreneurial skills, Jonathan was caught up in rape and murder  scandal that almost landed him in jail.
He was accused of raping and murdering Julie Ward, a British tourist, and then dumped her body.
Jonathan is said to have bought justice despite incriminating evidence linking him to the rape and murder of the young British tourist  more than 30 years ago.
Although Moi’s family claim their son succumbed to cancer at a hospital in Nakuru, blogger Robert Alai alleges that he died of HIV.
Alai revealed this through his official twitter account.
Here’s what he posted.

Coincident that the man accused of raping and killing Julie Ward died of HIV. Otek!! Awuoro!!! 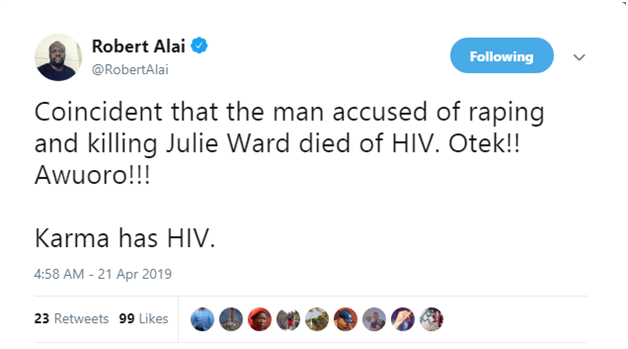