TED MALANDA speaks after IVY WANGECHI was hacked to death by her boyfriend, this is eye-opening. 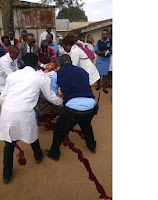 I could be wrong. But from the days of student Kibaki, to the time my generation graduated from university, only one Kenyan female student ever got murdered on campus. And that happened in Makerere during the reign of Idi Amin.

We drunk pombe, fought cops and had a hell lot of sex. But nobody got murdered. We probably didn’t smoke as much weed or do hard drugs, but there is nothing these kids are doing that we didn’t. We got kaswende like a nonsense. We broke hearts and got our hearts broken in return. Sugar daddies were there too and they “stole” and married our chicks as second wives.
The conversations that kids have with parents today about what to expect in campus didn’t exist beyond “usiposoma kwa bidii, shauri yako.”
The only deviation is that we were slightly older and that we studied in relative comfort in an orderly environment compared to the crowded slum dwellings with stinky toilets that varsities have become.
It’s the numbers, and the money or lack thereof. I dare say we scrap NYS and channel that money (which gets stolen anyway) into Helb to ensure every college kid can afford fee, food, shelter, clothing and a decent education.
The numbers in campus are crazy. It’s like tossing a baby into the madness of Machakos bus stop on Christmas Eve and praying that they will find their way home without bus fare.
This has to stop. Hatuwezi kuishi hivi.
The Kenyan DAILY POST

The post TED MALANDA speaks after IVY WANGECHI was hacked to death by her boyfriend, this is eye-opening. appeared first on Kenya News Alerts.