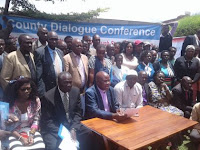 Thursday April 18, 2019-A group of Church leaders have indirectly reprimanded Deputy President William Ruto over his supposed rigid stand in the ongoing fight against corruption.

The leaders under County Dialogue team, on Wednesday insisted that President Uhuru Kenyatta was on the right path in his quest to leave behind a good legacy.

Led by Dr. Rev Eliud Nyakundi, they said the approach taken by Uhuru and Raila Odinga to unite the country should not be opposed by other political leaders.

“The country has been enjoying peace since that truce and this is the right way to go. As Church, we support the peace initiative in the country for the sake of development,” their statement read.

“Fight against corruption is timely. The President is doing a fantastic job. Those opposed to it should find a place in their heart and embrace it. There is nothing tribal about it,” they added.

Ruto has in the past insisted that the graft purge is selective and its main aim is to block him in 2022 Presidential race. He also says that only a section of Kenyans are targeted.

The post Shock as church leaders reprimand DP RUTO because of corruption as they warn him of this-UHURU and RAILA in the mix appeared first on Kenya News Alerts.