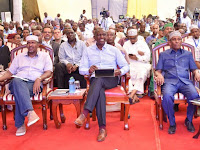 On Thursday during an ODM function in Nairobi, Raila claimed Ruto is behind the looting of money during the construction of Arrow and Kamwerer dams.
But speaking in Garissa County on Friday, a visibly angry Ruto said those who lost elections promised to go to Kibera to sell mandazis.
Ruto’s remarks seemed to be directed at Raila who in 2009 said he would go and make mandazi in Kibera when his political career was over.
Ruto said Raila should keep his promise after he lost the 2017 elections adding that he should let the government focus on serious issues of developing the country.
The DP said that Raila should not bring mandazi business into serious issues of dam construction across the country.
“I want to remind some people that they told us that if they lost an election they will go and make mandazis in Kibera. Why don’t you go and do that instead of bringing mandazi business into a very serious issue. Why are you importing mandazi economics to the government?” Ruto asked.
The Kenyan DAILY POST

The post RUTO abuses RAILA ODINGA badly after he said he was the mastermind of Sh 21 billion ARROW and KAMWERER dams scandal appeared first on Kenya News Alerts.