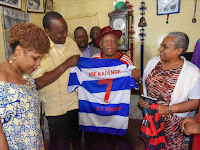 Sunday, July 07, 2019- Legendary Kenyan footballer, Joe Kadenge, is dead.
The all time Kenyan great passed on at a Nairobi Hospital where he has been receiving treatment according to his son Oscar Kadenge.

“Dad has not been in good shape. He had complications in breathing and his sight was also failing.

“His condition deteriorated when my sister passed on in the USA earlier this year and he was unable to attend,” Oscar said.

Early this year, the former Harambee Stars attacker was rushed to Nairobi hospital and was admitted at the High Dependency Unit after he suffered a stroke.
Joe Kadenge is without a doubt one of the best footballers Kenya has ever produced.

During his playing time, Kadenge featured for Maragoli United, AFC Leopards and the national team Harambee Stars as an attacking midfielder.

President Uhuru described Kadenge’s death as a ‘loss to the sporting fraternity and our nation’ in his condolence message.
Kenyans have taken to social media to pay tribute to fallen legend who has died aged 84 years.
See the tributes below.

We have today lost one of the greatest talents to ever grace a football pitch in our national uniform. Joe Kadenge was a true ambassador for the country and Kenyan soccer. May he rest in eternal bliss. May his spirit inspire more young people to pursue the game. pic.twitter.com/5CNT2m7mf5

Condolences to the family and friends of football legend Joe Kadenge. At his prime, Kadenge was unplayable; he terrorised defenders with dribbles, nutmegs and was a joy to watch. He raised a family of great footballers: Francis, Evans, Rogers and Oscar, who excelled in the sport.

As I fellowship at Kitengela SDA Church, it’s with great sadness that I’ve learnt of Joe Kadenge’s death. He was perhaps the most legendary of Kenyan footballers & shall be remembered for his exploits on the pitch. My sincere condolences to his family, friends & all he mentored. pic.twitter.com/MxakLQoajy

I join fellow Kenyans in mourning the legendary Kenyan footballer Mr. Joe Kadenge who passed away this morning. Mr. Kadenge emerged as a national star in the 1950’s when he debuted in the Kenyan Premier League inspiring a generation of footballers & enthusiasts countrywide.

The curtain has fallen on our football legend Joe Kadenge. His football artistry equalled modern day Thierry Henry, Christian Ronaldo, George Weah, Samuel Etoo etc. We must have a proper policy for the welfare of our sports heroes/heroines. RIP Joe.

“It is with profound sadness that I have learnt of the demise of Mzee Joe Kadenge. His death is a loss to the sporting fraternity and our nation. Joe exemplified talent, dedication and patriotism. My thoughts and prayers go out to his family at this time.” ~ H.E. Uhuru Kenyatta