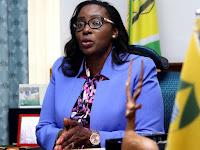 Thursday April 18, 2019-Nairobi County Speaker, Beatrice Elachi, has claimed that she has not been paid her salary for seven months.

Elachi, who was impeached by Nairobi county Assembly last year, claims that she has not been paid by the assembly since her impeachment.
In an interview with one of the local dailies on Thursday, Elachi accused the assembly of contravening a court order that directed that she continues receiving her salary and other privileges as the county speaker.

“The court directed I should be paid, but they have been defiant, my insurance cover has not been paid and I fuel my car from my pocket,” Elachi said.


Elachi is saying that her battles with the assembly have as well affected officials serving under her, noting that they too have been going without pay.

But Waithaka MCA Anthony Kiragu maintains that the latter cannot receive the said privileges on grounds of conflict of interest and gross misconduct and misuse of office.

The speaker was impeached for undermining the County Assembly Service Board’s powers and bullying staff to have the Speaker’s house tender awarded to her allies.

The post I have not been paid for seven months – BEATRICE ELACHI says adding that she is sleeping hungry over impeachment appeared first on Kenya News Alerts.