Here is the MP who has never had any bodyguard; he doesn’t need one-God protects him wherever he goes all the time 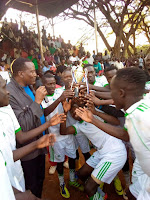 Monday April 22, 22019-Kitutu Chache South MP Richard Onyonka has revealed that for the past one year, he has never had a bodyguard.

Speaking on Saturday in Nyakoe, Onyonka, who is allied to Moses Wetangula’s Ford Kenya, said he doesn’t even need a bodyguard because he has God who protects him all the time.

“It is God who protects his people. For the last one year I have not been walking around with a bodyguard and to be honest I don’t need one,” he said.

This comes in the wake of a storm between Government and legislators following the withdrawal of security details attacked to MPs allied to Deputy President William Ruto over their engagement in the 2022 campaigns; something that has been condemned by MPs.

But according to Onyonka, police officers attached to politicians should be deployed to areas hit by insecurity to beef up security.

“There is no need for one person to be protected by police while several people are living in fear in villages due to insecurity. The Government should take all police attached to offer security to politicians and send them to insecurity hit areas,” he added.

The post Here is the MP who has never had any bodyguard; he doesn’t need one-God protects him wherever he goes all the time appeared first on Kenya News Alerts.