DENNIS ITUMBI may be hanged in Kamiti for plotting the death of DP RUTO! See what he will be charged with? 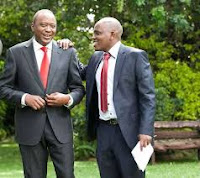 Tuesday July 9, 2019-Lawyer Denis Anyonka has said that the Directorate of Criminal Investigations (DCI) is right in its bid to charge Statehouse Digital Director Denis Itumbi with treason.

This follows the arrest of Itumbi over claims of authoring a letter claiming that some top state officials are plotting Deputy President William Ruto’s assassination.

Speaking on Monday, Anyonka who doubles up as a political analyst said that according to the law, any thoughts revolving around murder of the presidency is treated as treason.

Consequently, he added, the fact that the letter was insinuating that the DP might be killed, those found behind it can rightfully be charged with treason.

He made the remarks on Radio Maisha’s Bunge La Maisha on Monday morning.

He added that a win or loss now depends on how the DCI will present its case before the court, but added that it might have very negative effects of Ruto’s future ambitions.

“Iwapo itakuwa fake, itakuwa inemharibia sana (if it will be fake, it will have spoiled it for him),” he added.

The post DENNIS ITUMBI may be hanged in Kamiti for plotting the death of DP RUTO! See what he will be charged with? appeared first on Kenya News Alerts.